Meaningful Parenting- Do you or your child has 'Math-phobia?' Have you ever failed in your Maths exam? Part 1

If Yes...continue reading. Don't miss the end ....because that's the start.

Math-phobia is described by me as an extreme, persistent fear of the subject Mathematics. Others refer to it as -----Numerophobia or Arithmophobia which is the exaggerated, constant and often irrational fear of numbers. 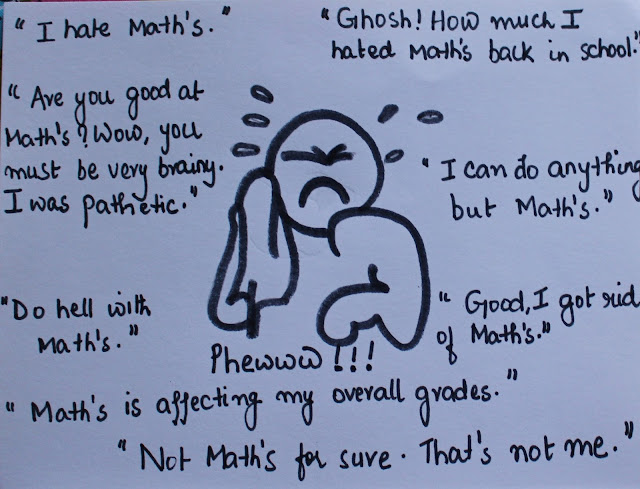 Innumerable expressions for this deep-rooted fear, Math phobia strikes many and has a tendency to spread over a lifetime.
'Fear' can still be managed. What about the 'nightmare', the 'horror' and the 'phobia' which one is subjected too.

I AM ONE OF THEM.

Math’s is the glorious barometer for 'being intelligent'- You cannot deny that. Looks like a stereotype coming from ages but a very strong one even now.
Let's look at how it starts and what happens when one is caught up in this downward spiral.

THE START-It starts the day (whichever grade the child is in) a mathematical question
And so, you jump to the next concept, without being strong on your previous one.


This failure multiplies the preexisting fear and now what we have is a 'math-phobic child'.


A small mathematical problem in 3rd grade becomes a terror by 8th grade, a career deciding factor by 12th grade and a  personality deficiency in eyes of significant others for life.


What it does to Self is even crueler. 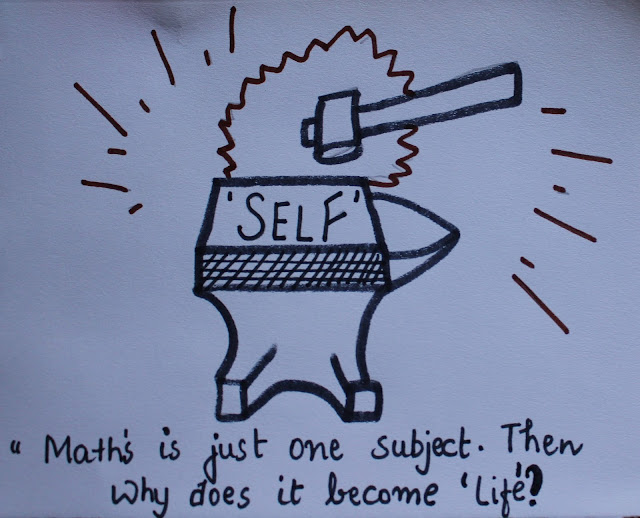 And here comes the most unsettling part- These children, individuals retire to a seemingly passive state and simply don’t try. Many at times it happens because the child or the individual perceives that he has no control over this subject how much he tries. Success breeds success but no one provided enough support for failure to breed success.

Gradually one is branded 'under- performer' in general.

Later on, this fear finds representation while dealing with technology, MS Excel and other areas of life where numerical ability is required.


This doesn’t happen overnight. The painful journey that started from for example- 3rd grade, tarnished many aspects of life for many individuals who later found joy in their chosen field. For some, it scarred them forever. And I am one of them.
The madness of 'fitting in' is sometimes so unreasonable that one cannot see that one is made to 'stand out' and live.


Many of us have gone through this journey. Do we want this for our child? Haven't we suffered enough? 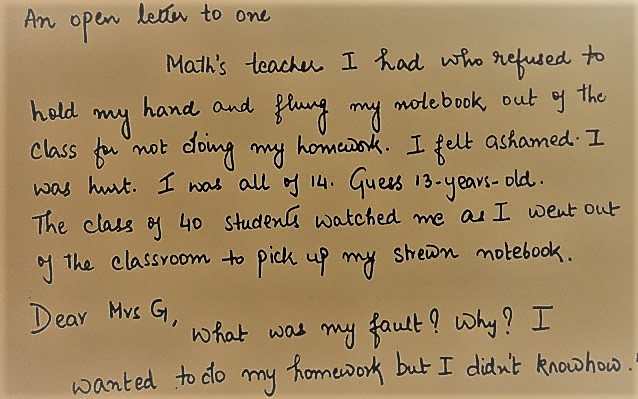 
I would have been a different person if not a Math’s person.

Click on the link to read Part 2- The solution lies here.
http://www.fourcloverlife.com/2016/11/meaningful-parenting-making-peace-with.html


Thank you for dropping by. Do not forget to like on FB and share. Drop in your feedback if any.For more such articles on Meaningful Parenting, Mindful Eating, Well-being and Motivation Cuppa,  please visit Four Clover Life at  http://www.fourcloverlife.com/.

Subscribe to get our latest content by email.
WANT TO START YOUR CORPORATE CAREER AGAIN?
We have a career focused group started on Facebook to help moms get back to their careers after a big break(6 months-8 years). Do join if you think you need any kind of support to bounce back to your career. The link to the group is as follows
https://www.facebook.com/groups/784600621713204/ 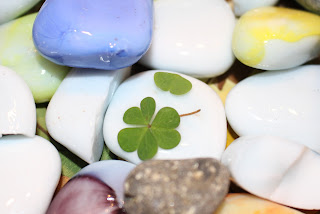 I wonder if Indians smooch?


They do? Really? Have they always smooched or it is some new found sexual angle? Oh, forget it! How does it matter? With our population, nothing matters.

I had an idea about smooching back in school- the year 1996. You know how Chinese whisper works. When it came to ‘smooching’ what came to me was something to do with tongue and esophagus. The implementation happened 15 years later in the most unsophisticated, an ‘atrangi’ and unhygienic way. For a middle-class Indian who is raised with the mantra- ‘jootha nahi khate’, smooching = sin. Unsanitary sin.

Forget it! I am not a fan of smooch. But what if my kid is? The thing is that the biological clock and the academic clock are in direct conflict when you enter your teens or hit your puberty. Just when the world is putting the right kind of pressure on you to go to Stanford, your mind is solving calculus equation, your body is doing its own weird calculation...size? Inches? Bang!Bang!Bang!

You want your child to s…
Read more

A flat tummy is a joyful tummy.
Being a writer-I get to sit more than I walk. :(
I belong to that category of women who are a not fitness freak but fitness conscious.I prefer eating healthy, drinking healthy and staying fit and not necessarily in perfect shape.

I also belong to that category of women who are forever juggling between home, work, kid, husband, friends and 'self'. Am also one of those who is addicted to 'basics’ of life and crave for simple basic things which can help.Then be it home remedies for hair growth or cold and cough or decorating the DIY way with strewn acorns or EXERCISE.I would any day choose mother earth and my body rather than hit a gym. Do I consider myself a fit person? No. But I try every day to do the right things for my body and mind and my soul too. This is one regime that I have been doing for a decade now. Of late I keep missing it because of my newfound interest in a brisk walk for 30 mins daily which burns 100 calories for me. I don't ge…
Read more

Dear Love,
You started your menstruation today. I know it is painful and difficult for you today but trust you will adjust well. I am there for you. I am glad you chose me to be your friend in this journey. I am not surprised that you knew about menstruation. It's just that knowing the right thing is important so that you are not misinformed about all kinds of bodily changes you will observe in near future.

Remember, nothing changes in your life, though. You play and run, you eat and have fun the way you have been doing.  Maintain good hygiene habits and change your sanitary pad when needed. If you want to wear a white dress, go ahead. You may encounter an instance or two where you may find that you have stained your skirt or your legging. That's just an accident and I expect you to walk to the washroom and change, come back and resume what you were doing. This is NORMAL. There can be times where you will be not feeling very well due to cramps in your lower abdomen. If someone (…
Read more