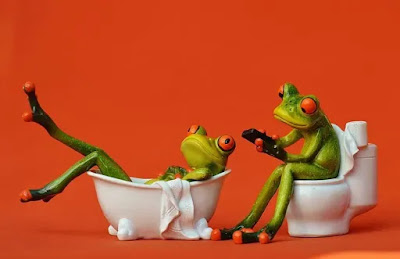 Have you ever been with your phone on your favorite spot...sorry, I meant pot? If Yes, then continue reading.
A debate too old, a concern as fresh as ‘NOW.’ Life today is all ‘SCREEN’ and ‘SCREENED.’ From electronic screen – television, smartphones, tablets, and computers to WhatsApp, Facebook, Instagram, Twitter and much more- we are obsessed with being screened.

Screen and its influence on children have always been dialectical in nature. However, the issue is under more storm now because the ‘SCREEN’ has invaded us anywhere and everywhere. From us to our children, it governs us from the office to bedroom to restrooms-its everywhere. 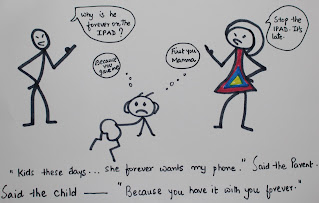 Well, that looks and sounds audacious and rude, and I guess ill-mannered, but that's with reality. We don't like it when the truth is spoken in clear terms.

We live in a different world than what our parents inhabited.
The basic theme is- any child will learn what you make him/her learn.  Either through observational learning or through teaching, or through experiential learning.

Imitation/Modelling/Observational learning
Newborn babies have a primitive, innate ability to learn through imitation by copying another person's behavior. And later, as they grow, the power of modeling the parent’s behavior, observing them, and learning keeps growing.


The house is loaded with amenities and items of furniture and gadgets. For everything, there is a gadget available from the kitchen to the living room to a bedroom. Inspect your home, and you will find devices of all kinds. Are they useful? Yes, they are. But we are not talking about household gadgets. We are talking about ‘SCREENS’ -television, laptops,  computers, tablets, Smartphones.


How many screens do you have in your home right now?
I have eight in a house of two adults and one 4-year-old kid.
I am flummoxed. And the most valuable “SCREEN AWARD” goes to our smartphones. Thanks to Apple.
What has a smartphone changed in us?

So, if that is what is the most overarching gadget of our life, isn't it normal and absolutely normal for the little one to also have one?
After all, isn't it expected that he will be intrigued about that gadget that is ruling our life and his parent’s attention at the cost of his? Isn't he seeing and experiencing it all the time?


Isn't it perfectly fine that he plays with what we have in our hands and strewn all over home? He observes us and learns, and then we have the audacity to crib and blame and accuse----- “These days’ kids, I must say.”


RESEARCH FINDINGS
TV viewing starts early from infancy, and by three months, around 40 % are watching TV or some form of media, which sharply increases to 90% by the time the baby turns into a toddler -2 years.
The hours spent watching TV increase significantly for school-going children, and studies reported a drop only when children reach adolescence.
There are also gender-specific findings where studies found that boys watch slightly more than girls.
Also, if parents watch a lot of TVs, their children do too.
Many times, parents with limited education are likely to view more TV, adversely affecting the child at home.
TV viewing and its effect on children's growth and well-being have been extensively studied. Results have found 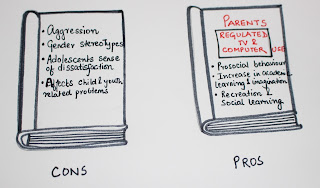 But the use of a computer that offers more interactive media has shown some positive effects on learning. All the more since computers, iPads are widely used in school, so it does become a necessity. In addition, there are advantages that research has shown -ranging from an increase in prosocial behavior, academic learning and imagination, and other educational benefits.
These benefits result only when there is a parent-regulated ‘screen’ use.

TV and computer media regulation responsibility primarily lies with the parents. However, some efforts are being made in patches by the government in some countries whereby they are bringing regulations that monitor the content of the TV, internet access, and restricting violent programs and adult content during prime time.

(The research findings are attributed to the book On Child Development-By Laura E Berk,8th Edition).