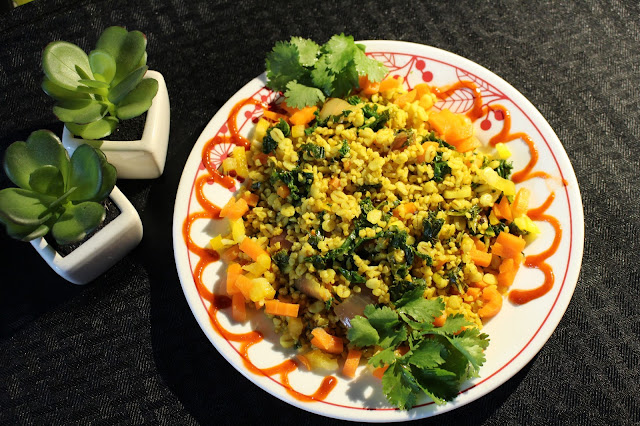 This one is totally new invention for me with my three favourites -Barley, Cracked Wheat and Kale leaves.

Barley is a very versatile cereal grain and is known to have rich nutritional content -molybdenum, manganese, dietary fibre, and selenium, and a good source of copper, vitamin B1, chromium, phosphorus, magnesium, and niacin.
Cracked Wheat is primarily a wheat product made from whole raw wheat kernels which are made into small pieces which resemble rice grains. As the name suggests cracked wheat is made from whole wheat berries, hence it carries a great deal of nutrition and fibre. The rich outer bran and the germ of the wheat are what makes it so healthy. For this reason, it is often added to healthy diets, especially those eaten by people who are concerned about heart health.

Kale is one of the healthiest amongst all the green leafs around.In a 100 gram serving, raw kale provides 49 calories and is a rich source of vitamin A, vitamin C, vitamin K, vitamin B6, folate, and manganese.Kale is also a rich source of thiamin, riboflavin, pantothenic acid, vitamin E and several dietary minerals, including iron, calcium, potassium, and phosphorus
Boiling raw kale diminishes these nutrient contents, with the exception of vitamin K.

Barley is chewy in texture so for those people who haven't taste barley yet, this will be a new addition to the palette. Cracked wheat is just like rice in texture when cooked. :)

Barley and cracked wheat can become mushy if excess water is added. That will ruin the entire preparation. This process is the most crucial hence ensure only 1/2 inch of water above the grains while putting it to boil.
You can add vegetables of your choice. Since it is a kale based pulao I limited my vegetables and let kale take over as the main lead. :)

Sautéing them just for a minute keeps its nutritional value pretty much intact. It also gives a nice crunch to the dish.
If making this for kids, omit the green chilli and balance the spices. Finely chopping the vegetables makes it easy for the kids.